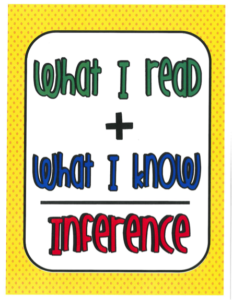 We make inferences as often as we brush our teeth. Everyday, often without being aware, we make inferences based on the behavior of ourselves and others, our environments, and our interactions we have with people around us. There are two types of inferences, inductive and deductive. Inductive inferences start with an observation and expand into a general conclusion or theory. For example, if one’s dog goes inside on Memorial Day when the fireworks start, and then goes inside again on Fourth of July when the fire works start, but stays outside during your entire birthday BBQ with no fireworks, and then goes inside on New Year’s Eve during the fireworks, one can infer that his or her dog is afraid of fireworks. Deductive inferences are the opposite. The process of deductive inference starts with a general theory and then hones in on a specific observation or confirmation. For example, if one knows that fireworks cannot possibly go off in the rain, then he or she can make a deductive inference and come to the conclusion that if it is raining out, the fire works will be canceled. The scientific method is applied to inference through the steps taken to make both inductive and deductive inferences. Inductive inference begins with an observation, and then a pattern of such observation develops. One then makes a hypothesis based on the pattern and finally a theory based on the hypothesis. Deductive reasoning begins with a broad theory, then a hypothesis is stated and from the hypothesis observations can be made that help one to come to a conclusion and confirm the original theory. However, problems arise when there is not enough statistical evidence to support scientist’s inferences because the public often believes certain studies and inferences by scientists to be true without proper statistical evidence. The public puts a lot of trust in scientists, doctors, and educated experts, sometimes without checking the necessary facts. A statistical inference is an inference that is made with the existence of uncertainty while a fallacy is an incorrect inference. Scientists often make inferences based on assumptions made of small population and then argue that such assumptions are representative and apply to the whole population. In this chapter, we will discover the different types of inferences through examples and further assess the mentioned misconceptions of inference that affect both the public and scientists.

According to Statistically Significant Consulting, Statistical inference is “based upon mathematical laws of probability.” Through statistical inference, we can formulate a hypothesis and use mathematics and probability to examine how accurate our hypothesis is for a sample population. A p-value is a value used to determine how accurate sample data is even if the null hypothesis of an experiment is true. Even if we are not certain on exact numbers or probabilities, we can conclude whether our data provides strong evidence in agreement or against our null hypothesis. It is rare that one knows the shape or standard deviation of certain data given and the possibility of going back out to retrieve our own data for a certain experiment is not an option. We must evaluate data often without knowing the shape or standard deviation of the population. “Standard statistical tests require assumptions.” We must realize that the accuracy and “validity of our data” depends on the assumptions we make. Statistical inference can be described as a chain of assumptions and reasoning. A common mistake occurs when one gets confused in determining the reason for a certain aspect of the chain. Most people forget that a sample distribution is just that, a distribution of sample data. Each piece of data represents the average of one sample from a proposed population. The sample distribution is in no way representative of everyone or everything. Another common misconception is that as the sample size of a certain experiment grows, the resulting data should become more similar to that of the population. A larger sample size does not automatically result in a more accurate representation of a sample population.

Deductive and Inductive reasoning are often confused with one another. Deductive inference is a form of 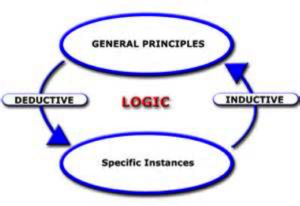 valid reasoning. When we start with a big thought, idea, hypothesis, or concept, and reach a specific, detailed conclusion through reasoning we use deductive inference. Scientists used deductive reasoning with the scientific method when trying to test a hypothesis or theory. Often time people make incorrect hypothesis, which leads to their deductive inference to be wrong. For deductive inferences to be true, the hypothesis, or general idea must be true. If something is true for a large majority or class of people, it is true for every single person in the majority or class. For example, “All plants are living organisms. A Fern is a plant.” Therefore, “A Fern is a living organism” is true. Since the two premises, “All plants are living organisms” and “A Fern is a plant” are true, the conclusion, “A fern is a living organism” is also true. The problem with deductive inferences is that it is possible to still come up with a logical and common conclusion even if the premises are false. For example, “All grandmothers bake cookies and hot chocolate. Mary is a grandmother. Therefore, Mary bakes cookies and hot chocolate,” is a logical conclusion to come to, however it is untrue because the first premise, “All grandmothers bake cookies and hot chocolate” is untrue. It is easy for one to make the mistake of assuming a conclusion to be true even if the first premise is false because of stereotypes or largely understood cultural ideas. Often, in storybooks or movies grandmothers make warm cookies and hot chocolate for their grandchildren, so a child may believe the conclusion “all grandmothers bake cookies and hot chocolate” to be true, however a mature adult or teenager can differentiate between fiction and reality. In science, the premises and conclusions are not always so easy to determine to be true or false which can cause one to believe a certain conclusion made through deductive reasoning is correct due to confusion, or simply a lack of education.

Syllogism is a form of deductive reasoning. In syllogism there are two premises, a major and minor premise. The major and minor premises have a common thought or idea that connects them to form a logical conclusion. For example, “Every graph shows positive growth” would be followed by the premise, “The data from 2011 is organized into one of the graphs.” Both of those premises would lead to the conclusion, “The data from 2011 shows positive growth.” Syllogism is often used to test the validity of a certain argument.

Inductive inference, on the other hand, forms broad conclusions or generalizations based on small, specific observations. Patterns are formed within certain observations, which allows people to form generalizations and then infer a theory. Inductive inference is difficult to master because both premises of a certain conclusion can be true and still result in a false conclusion. For example, “Katie is a student. Katie has a study period. Therefore, all students have study periods.” The conclusion is not only false, but also does not logically follow the two premises. In science, it can be difficult to recognize that a conclusion is false if both premises are true, which is often the case in inductive inferences. Wassertheil-Smoller told Live Science “In science there is a constant interplay between inductive inference (based on observations) and deductive inference (based on theory), until we get closer and closer to the ‘truth,’ which we can only approach but not ascertain with complete certainty.” 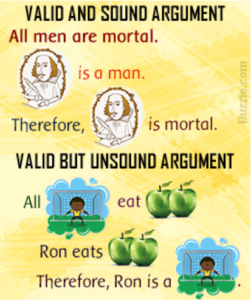 Marco Marozzi addresses the misuse of statistics in connection with inferences in Does bad inference drive out good? Specifically in the medical field, Marozzi states that in order to avoid certain statistical errors in medical journals, each journal should have their own statisticians to review the information before it is published. Someone commits a fallacy when he or she takes up a position or tries to convince someone else to take up a position based on an incorrect premise. Numerous sources cite the importance of basic critical thinking when trying to avoid committing a fallacy.

Does Bad Inference Drive out Good? Retrieved From Clinical and Experimental Pharmacology and Physiology

(2014, March 14). The Problem of Induction. Retrieved From http://plato.stanford.edu/entries/induction-problem/

(2013, August 25). Why You Should Avoid Logical Fallacies. Retrieved From http://www.trulyfallacious.com/logic/logic-101/why-you-should-avoid-logical-fallacies