Oversimplification . The most common misconception related to understanding the scientific method is over simplification. Many people think of the scientific method as a linear process, performed step by step. This is not the way the science works. While there is a general process that is followed, scientists are not bound by this structure. Scientists are always making new observations that inspire new questions or results are unexpected and a new test is conducted. Instead of being a linear process, the scientific method is a complex cycle that involves many people and does not follow set steps, but is more free form in nature. Ideas generate new ideas and lead to new hypotheses, and deeper understanding. Some people may ask, “If science is so messy, how can it be trusted?” This is a good question. The scientific community plays a huge role in “checking” science. Scientists share their results with the scientific community and it allows for conversation and dialog (Understanding Science, 2012). Another important aspect of the scientific process that helps with reliability is replication, good research should be able to be replicated and generate the same results (Gazzaniga, 2011). 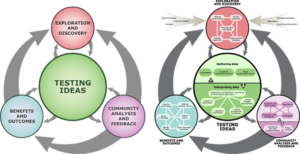 Some people think that if scientific studies don’t reach a strong conclusion they become unpublishable or unhelpful. This is also a misconception. Even if a scientific inquiry does not come to a clear conclusion it is still publishable and includes useful information. In fact, most studies don’t come to a clear conclusion, and that is okay. Science is always changing. Research, even without strong conclusions, leads to new ideas and conversations. Scientific papers are not meant to be grand conclusions, but rather discussions of thought, process, and limitations (Misconceptions, n.d.).

The idea that a good theory is one that can be easily proven right is another common misunderstanding. A “good theory” is not defined by its likelihood to be correct but rather by its ability to generate many hypotheses. For example Jean Piaget created a theory about childhood development occurring in stages from birth to adolescence. This is a good theory because it allows for many specific testable hypotheses and thus generated thousands of research papers and was responsible for a better understanding of childhood development. In contrast, Sigmund Freud provides an example of a bad theory. He created a theory explaining that dreams actually represent unconscious wishes. This is a bad theory because it cannot generate any testable hypotheses (Gazzaniga, 2011).

The Scientific Method In Psychology

People may think that the scientific method is not as relevant in psychology because it is not a physical science, but in reality, it is hugely important. This section will explore some of the types of research done in the field of psychology. There are three major techniques in psychological research, these include descriptive studies, correlational studies, and experiments. These methods vary in the amount of control the researcher has over the variables. A variable as defined in Psychological Science is “something in the world that can vary and be measured.”

Another misconception about the scientific method is that the scientific research that she conducts will support her hypothesis. Scientists also need to be wary of this, they should not conduct experiments in which they are simply trying to prove their hypothesis correct. In fact some of the greatest discoveries in science actually came out of serendipity. Some examples of include: Velcro, x-rays, radiation, pulsars, Vaseline, and Teflon. If scientists had been stuck trying to prove their hypotheses right or wrong, these discoveries may have never been learned. (Burns, 2012) Rick Stevens, a professor of Computer Science at University of Chicago, on a serendipity panel explained that the features of serendipity include, collaboration, reliable funding, and a fearlessness regarding failure. (Borzo, 2014)

Theory of “Children’s Gravity Error”. Professor Bruce Hood established “children’s gravity error,” a theory that explains how young children create simple scientific theories in order to understand the complex world around them. He observed that children are confused by falling objects that do not follow a vertical trajectory. He realized that the children had created a simple theory of gravity and thus falling objects that were not simply going up and down didn’t make sense in their young brains.

This is an important discovery and it is also a product of serendipity. Hood was originally researching children’s spatial awareness. In his experiments he used different falling objects which confused the children. This observation led to the creation of his theory. (Burns, 2014)

Discovery that Brain Cells Respond to Lines and Edges. Torsten Wiesel and David Hubel studies brain activity in cats, especially the brain cells associated with vision. They wanted to study how the eye transferred visual information to the brain. The two scientists hypothesized that the cats’ brains would react to seeing dots. They had cats watch dots on a screen, but the cats didn’t react. During one of their tests their projector jammed between slides and a line flashed on the screen, the cat’s brain activity responded to the line. This was a huge discovery and led to the Nobel Prize.

The scientific process is not linear, it is messy and complex and involves changing ideas, revision, creativity, and collaboration. In fact, some of the most exciting discoveries have been products of serendipity and unintended results.

Burns, C. (2012 May 4) Oops I invented the rocket! The explosive history of serendipity. The

Keyes, G. (2010). Teaching the Scientific Method in the Social Sciences. Retrieved from:

Misconceptions of the Scientific Process. Retrieved from: