Skip to content
This sample answer key corresponds to the chapter “The Written and Intellectual Legacy of the Zapotecs”. Keep in mind, in most cases, there may be more than one way to answer a question.

Do you recognize any symbols in the Lápida de Matatlán? Try “reading” it; how is the information organized? Describe the people—what are they doing? Do you see any animals or plants?

What follows is a fairly detailed description of the lápida. Students may notice some of these parts, although they are not expected to have noted or understood all of what follows.

In the Matatlán Lápida, we can see 4 birds, corn kernels in the upper right corner, and some people with headdresses. There are four people, two men on the left and two women on the right.

Some of the detail includes people’s jewelry, clothing, and the staff that the woman in the middle to the right is holding. This is a governing staff, and it is notable that a woman holds it.

In addition, the woman in the center on the right wears a gamizh, a blouse that is woven in a triangular shape. We can also see wrinkles on the face of the person in the middle on the left. Perhaps this person is older than the others depicted on the lápida. Finally, we can see objects coming out of the mouths of three of the people. These objects are glyphs that represent the act of speaking.

The lápida is a very complex visual object that includes both portraits and symbols. Some of the symbols represent written language. Can you find and describe these parts of the lápida?

In the lápidas, you can see symbols outlined in bold- they represent the names of the people depicted. They should be considered ‘written language’.

Use a browser on your mobile device to search for other images of Zapotec lápidas or Zapotec stelae. Look first for images of lápidas, then Zapotec stelae. If possible, compare what you find with a partner’s results. Record the similarities and differences of the images.

Search results may vary. The screenshot below shows a variety of images of Zapotec lápidas and stelae. The lápidas tend to include images of people in pairs. They are also organized in quadrants or divided into two sections (usually horizontally). The Zapotec stelae, like stelae in other societies around the world, can have one person or multiple people depicted, and may include inscriptions of dates or names and are made to stand in an upright position. 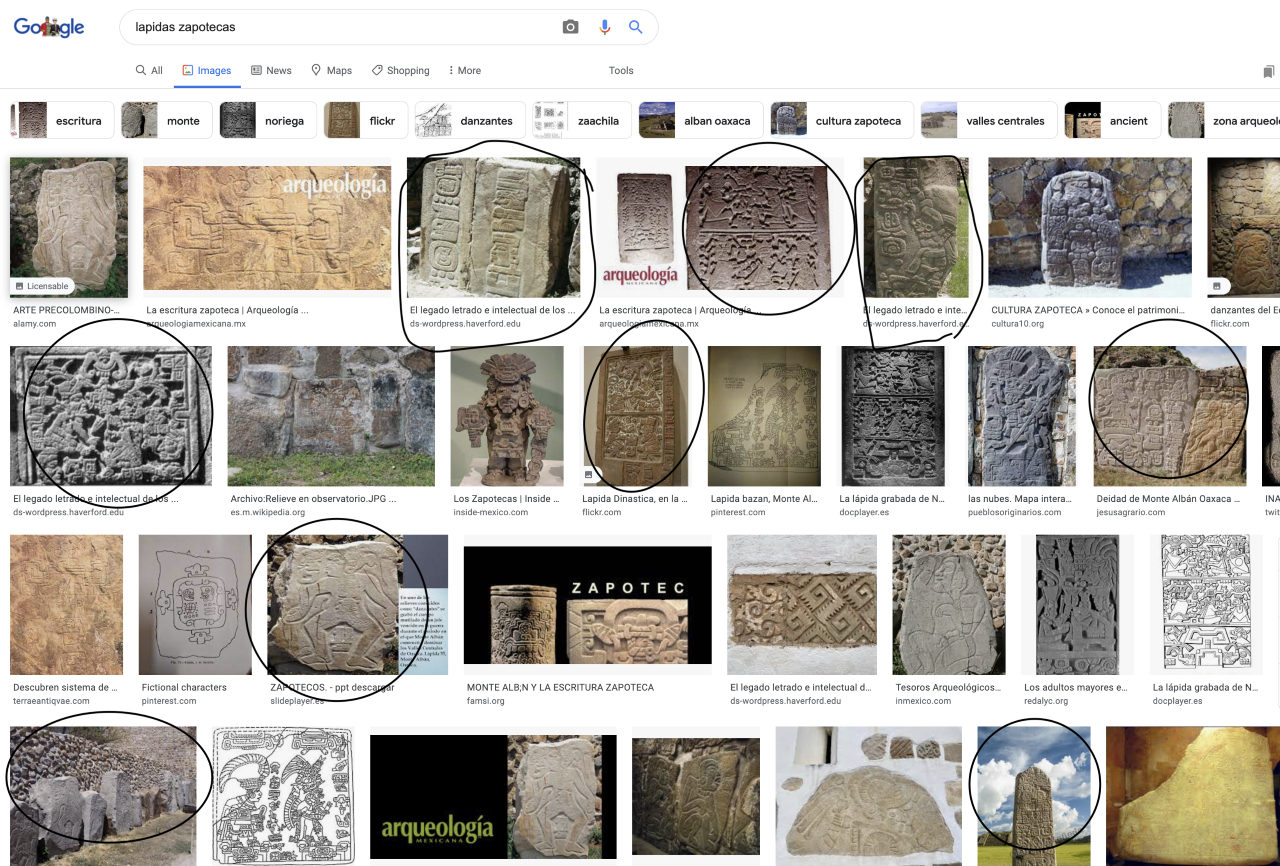 Discuss the significance of this quote: “siempre la lengua fue compañero del imperio” (“language was always the companion of empire”). This quote appears in Antonio de Nebrija’s grammar from 1492. To see the digital version, click on this link.  (The quote can be found on page 5, line 12).

The quote can be found on lines 12-13 and is in black letters. Students can discuss various issues including:

1. Language shift (see Language Shift module)
2. Indigenous languages (Zapotec, Mixtec, Nahuatl, or Chatino which are native to the Americas) and Colonial languages (English, Spanish, Portuguese or French introduced to the Americas).
3.  When, where, how, and why the following languages were used: Zapotec, Nahuatl, and Castillian (Spanish). Some answers might include: