The Altair inspired many hobbyists to design their own computers. One of these tinkerers was an unconventional, self-taught engineer named Stephen G. Wozniak. Woz, as he was known to his friends, had been an avid electronics hobbyist since his youth. Like many of the seminal figures in the history of computers, Woz was the son of an engineer – his father, Francis, helped design satellite guidance systems at the huge Lockheed Missiles & Space Company plant in Sunnyvale, California, not far from Intel and Fairchild Semiconductor. Francis taught his son the fundamentals of electronics and encouraged him to experiment on his own. Woz had a talent for electronics, and he built all sorts of gadgets, including a transistor radio. By the time he was in sixth grade, he had decided to become an electronics engineer.

An unusually intelligent youngster, Woz was an indifferent student. He shone in the few classes that interested him – mathematics and science – and did poorly in the rest. In general, he was bored by school; electronics and, increasingly, computers were his greatest interest, and neither his junior high school nor his high school had much to offer him in either subject. He took to reading computer manuals and programming textbooks on his own, and he soon pulled ahead of his fellow students and even his teachers. When he was thirteen, he built a transistorized calculator that won first prize in a Bay Area science fair. Much as other teenagers pasted up photos of rock stars and other heroes on their bed room walls, Woz put up pictures of his favorite computer systems. He was drawn to minicomputers most of all, admiring their compactness, accessibility, and inexpensiveness. By the end of high school, Woz knew that he wanted to be a computer engineer.

Lackadaisical about school, Woz didn’t give much serious thought to college. On a visit to Colorado, he had seen snow for the first time and had fallen in love with it; so, instead of going to a well-known engineering school, such as MIT or Stanford, he went to the University of Colorado. After a year in Colorado he transferred to De Anza College, a junior college in Cupertino, California, and then he left school altogether, working for a year as a programmer for a small computer company. He gave college another shot in 1971, this time at the University of California at Berkeley, but that didn’t work out either, and he dropped out and went to work as an engineer in the calculator division of Hewlett Packard in Palo Alto. Why study computers when you could make a good living designing them?

In the summer of 1971, when Woz was working as a programmer, a friend introduced him to a quiet, intense, longhaired teenager by the name of Steven P. Jobs. Jobs, who was sixteen years old at the time, lived in nearby Los Altos, where his father was a machinist. Although Woz was five years older, he and Jobs hit it off right away. Like Woz, Jobs was an electronics hobbyist as well as a student at Homestead High School in Cupertino, Woz’s alma mater. He was just as bored by school as Woz had been, and just as obsessed by the shadowy by-products of technology – in particular, by a small electronic gadget, known as a blue box, that emitted various tones, enabling the user to take control of a telephone line and make free calls. Woz designed one of his own, and Jobs, in the same collaborative style they would use to develop the Apple computer, obtained the necessary parts and circuit boards for more boxes from local electronic companies. Although it was illegal to use the boxes, Woz and Jobs sold about a hundred and fifty, at $40 to $150 apiece, to friends and acquaintances.

After high school, Jobs went to Reed College, in Portland, Oregon, but dropped out during the second semester. He hung around the campus for another year, living in the dorms, attending classes occasionally, and reading a good deal about Eastern religions. He became a vegetarian, subsisting on cereal, partly because it was inexpensive and partly because it entailed a small degree of mortification. Then he returned home and got a job as a video game designer for a rambunctious young firm called Atari. Jobs worked at night, and Woz often came by to play with the company’s video games. Within a few months, Jobs had saved enough money to quit his job and fly to India, where he traveled with a friend from Reed until 1974, when his money ran out.

The introduction of the Altair had led to the formation of computer clubs all over the country, including one in Silicon Valley known as the Homebrew Computer Club. Woz heard about the group through word of mouth and attended the first meeting, held in an engineer’s garage in Menlo Park, near Stanford University, in March 1975. About thirty people showed up, but the group, fueled by the excitement generated by the Altair, expanded rapidly. It soon numbered about five hundred members and held monthly meetings in an auditorium at the Stanford Linear Accelerator Center. These meetings were divided into a “random-access” period, during which the floor was thrown open to anyone who had anything to say, and a “mapping” period, when the audience broke up into small groups devoted to common concerns. Excited by the prospect of a computerized world, Woz was one of Homebrew’s most active members.

He started building his own microprocessor-based computer later that year. For $20, he bought a new 8-bit microprocessor, the 6502, designed by a small Silicon Valley company called MOS Technology (now based in Norristown, Pennsylvania, and a part of Commodore Business Machines Inc., the home computer manufacturer). Woz first wrote a BASIC interpreter for the 6502; then he designed the computer itself, laboring mostly at night, after work, for about six months.

The device consisted of a single circuit board with 4K of RAM. Although it wasn’t as powerful as Altair’s and IMSAI’s offerings, it was cheaper and less complicated, and it included circuits that enabled it to be connected directly to a monitor. Woz did most of the work, but Jobs, who was trying to persuade Woz to go into business with him, chipped in with many suggestions. Woz demonstrated the board to an enthusiastic Homebrew audience and then tried to interest Hewlett-Packard, his employer, in making personal computers. However, the company doubted there was much of a market for the machine.

Jobs, however, thought otherwise and began a dogged search for buyers. He found one in Paul Terrell, owner of the newly established Byte Shop stores and a member of Homebrew. Terrell ordered a hundred boards at $500 apiece, and Woz and Jobs set up a partnership – the Apple Computer Company. Brandishing Terrell’s order as proof of their financial credibility, the pair obtained the necessary parts for the boards on thirty-day credit. Scrambling for operating funds, Jobs sold his Volkswagen bus and Woz his Hewlett-Packard programmable calculator, realizing $1,350 altogether. They also borrowed $5,000 from a friend. Then they hired one firm to make the printed circuit boards and another outfit to plug the chips into the boards. Since Woz’s single- board computers lacked keyboards, terminals, disk drives, and other peripherals, they could be used only by sophisticated hobbyists – but the Bay Area was full of them. All told, Woz and Jobs sold about 175 boards for $500 apiece, netting about half that sum in profit. (The retail price was a whimsical $666.66.)

The board’s success convinced Woz and Jobs that they were on to something. While Woz went on to design a more sophisticated computer, Jobs looked after the business side of the operation. Capital was the most pressing need. Jobs asked Nolan Bushnell, Atari’s founder, for some help, and Bushnell sent him to Don Valentine, a venture capitalist who in turn referred him to A. C. Markkula. Markkula had been Intel’s marketing manager between 1970 and 1974, when the firm introduced the microprocessor and saw its sales begin to take off. Rich with stock options – a millionaire at thirty-two – Markkula had left the company to devote more time to the finer things of life. He sometimes helped his entrepreneurial friends with their business problems, free of charge. In October 1976, at Valentine’s suggestion, Markkula stopped by the Jobs’ garage – Apple’s humble distribution center, sales office, and world headquarters.

He liked Jobs and Woz, and he helped them write a business plan. In the course of his work, Markkula realized that the personal computer industry was on the verge of an enormous boom; some consulting firms were predicting that personal computer sales would reach several billion dollars by 1982. It seemed to him that the Apple II – the successor to Woz’s single-board computer – was a first-rate machine, just right for the mass market. With the proper guidance, Apple could become a big company within a few years. So Markkula decided to join Woz and Jobs, buying a third of the firm for $91,000. He arranged a $250,000 line of credit for the company with Bank of America, and raised about $660,000 from several sources, including Arthur Rock, the venture capitalist who had helped finance Intel, and Venrock Associates, a Rockefeller family company. Apple now had the money and management to become a leader in the personal computer industry.

Introduced in 1977, the Apple II proved to be the Volkswagen of personal computers. It sold for only $1,195 (with 16K of RAM and without a monitor) and was ideal for playing video games; in fact, Woz, who loved to play games himself, had designed the computer with that purpose uppermost in mind. Bolstered by an imaginative advertising campaign, the Apple II took off, and Apple became the fastest-growing company in American history. The firm’s annual sales rose from $775,000 in 1977, its second year, to $335 million four years later. When Apple went public in December 1980, it was one of the most successful stock offerings in Wall Street history. Its stock opened at $22 and had climbed to $29 by the end of the day, bringing the company’s market value to $1.2 billion. At the opening price, Jobs’s shares were worth $165 million, Woz’s $88 million, and Markkula’s $154 million. By the end of 1983 – six years after its incorporation –Apple had almost 4,700 employees and $983 million in sales.

In 1981, IBM introduced its own personal computer, the PC. Backed by one of the biggest and wealthiest companies in the world, the machine was an immediate success. In 1981, about 35,000 were sold; in 1983, 800,000; and the IBM PC became the most popular and influential personal computer. Many manufacturers, hitching a ride on IBM’s coattails, came out with low-priced PC-compatible computers, while other firms carved out comfortable niches for themselves as makers of PC-compatible peripherals and software. As a result, the PC has had a stabilizing influence on the youthful personal computer industry, providing a focal point for manufacturers and customers alike. Once an exotic and expensive technical tool, the computer has become an ordinary commodity; like the TV set or the refrigerator, it is a permanent and accepted addition to the technology of life. 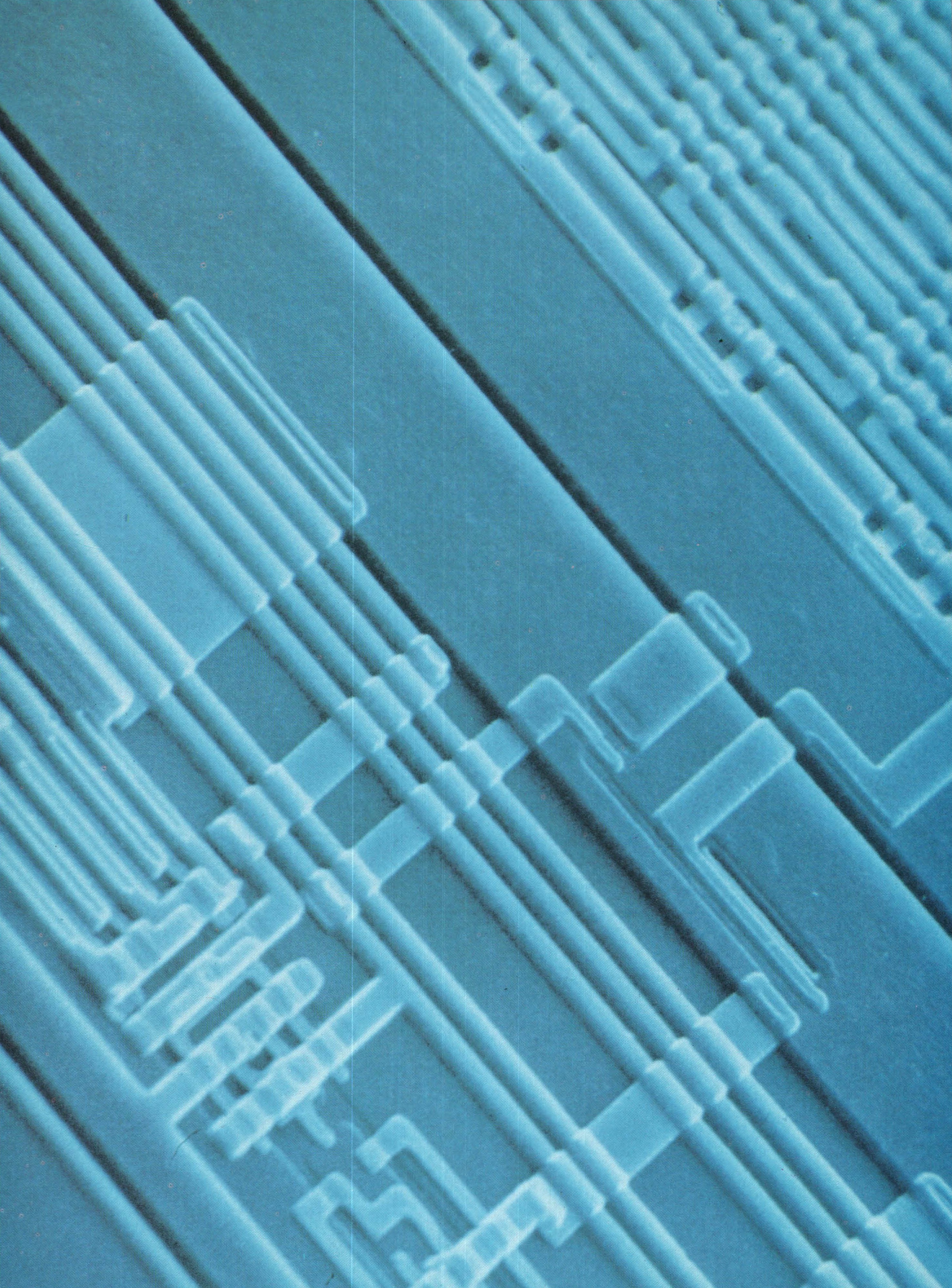