The method of constant differences is a simple but powerful technique for calculating consistent numerical progressions. Tablemakers often used it, and the process can be best illustrated with a task that the Difference Engine was designed to handle — the calculation of the cubes of all the numbers from 1 to 100,000. 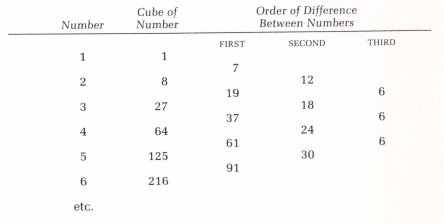 All this boils down to a basic mathematical principle: Any consistent numerical progression may be calculated by a process of repeated addition. Since the method of constant differences is a repetitive process, it lends itself quite nicely to the actions of a machine. As Babbage planned it, an operator would feed the various differences into the Difference Engine, which would add them to each other again and again and record the answers with a printer of some kind. Because each addition is based upon the preceding one, the method contains a built-in check: if the last numbers in a table are correct then all the numbers must be correct. A human computer, on the other hand, may slip up at any point.

Babbage believed that he was the first person to conceive of a Difference Engine, but he was wrong. There is very little new under the sun and his invention was no exception. In 1786, one E. Klipstein, of Frankfurt, Germany, published a small volume called, roughly, Description of a Newly Invented Calculation Machine. The book gives an account of a calculator invented by a J. H. Muller, a captain of engineers in the Hessian army, and includes an appendix that, astonishingly, describes a Difference Engine (although Muller used another term). The machine, which Muller hoped to build if he could raise the necessary funds, was designed to calculate tables by the method of constant differences and print out the results directly on paper. (The Difference Engine’s printing process was superior, since Babbage’s machine was designed to punch out plates that could be used to print any number of copies.) Unfortunately, Muller failed to raise the money and nothing came of his proposal.

Babbage realized that a full-fledged Difference Engine would require thousands of precisely engineered gears, axles, and other parts and would cost thousands of pounds. Even if he possessed his father’s considerable fortune, which he was bound to inherit, the project would undoubtedly strain his resources. Moreover, it would benefit England, not him, and he therefore believed that it should be financed with outside support, preferably from the government. So Babbage wrote an open letter to Sir Humphrey Davy, president of the Royal Society of London, Britain’s pre-eminent scientific organization. The missive, dated 3 July 1822, described the Difference Engine, explained its many applications and, in the understated tones of an English gentleman, requested external funds.

Babbage’s letter was widely circulated and a copy reached the exalted hands of the Lords of the Treasury, who were interested in any machine that might ease their work and improve the state of British navigation. On 1 April 1823, the Lords wrote the Royal Society, requesting an assessment of Babbage’s proposal. Davy appointed a committee to study the matter, and the organization issued its official verdict about a month later: “Mr. Babbage has displayed great talent and ingenuity in the construction of his Machine for Computation, which the Committee think fully adequate to the attainment of the objects proposed by the inventor; and they consider Mr. Babbage as highly deserving of public encouragement in the prosecution of his arduous undertaking.”

On 27 June, Babbage was summoned for an interview with John Frederick Robinson, Chancellor of the Exchequer. “I had some conversations with the Chancellor of the Ex’ who treated me in a most liberal and gentlemanlike manner,” Babbage wrote Herschel. “He seems quite convinced of the utility of the machine and that it ought to be encouraged. At present he is to procure for me £1000, and next session, if I want more to complete it, he is willing that more should be granted or that I should have a committee of the house if a larger sum were wanted than the fund could be charged with.” The chancellor’s offer was unprecedented; the British government didn’t normally support private scientific or technical projects, but the condition of the Naval Almanac and other tables inspired it to take a chance. Babbage got his money, and one of the most extraordinary episodes in the history of science had begun.