In 1964, the U.S. Patent Office finally issued Eckert and Mauchly’s ENIAC patent – seventeen years after they had applied for it. The delay had been caused by technical disputes of various kinds, chiefly between Sperry Rand, which had inherited the patent rights from Remington Rand, and Bell Labs, which contended that the ENIAC patent interfered with some of its own. At long last, the disputes were settled by the Board of Patent Interferences, the patent was granted, and Sperry began notifying computer companies that they were violating the ENIAC patent. Sperry offered its competitors patent licenses at a fee of 1.5 percent of the selling price of their equipment. (IBM was excluded; it had reached a $10 million royalty agreement with Sperry in 1956.) With millions of dollars at stake, no one accepted Sperry’s offer and the issue ended up in the courts.

In May 1967, Sperry sued Honeywell and the Control Data Corporation for patent violation. Meanwhile, Honeywell countersued, accusing Sperry of trying to enforce a fraudulent patent. The Honeywell-Sperry case was consolidated and assigned to the federal district court in Minneapolis (Honeywell’s home city); the Sperry-Control Data suit went to a federal court in Baltimore. The cases involved two different patents. In the Control Data dispute, Sperry was seeking to enforce a 1954 patent covering Eckert and Mauchly’s mercury delay line memory. The essence of this patent was the idea of regenerative memory –         the notion of retaining stored information by periodically reenergizing it. In the Honeywell case, Sperry was seeking to uphold the ENIAC patent only (although the judge decided to rule on the regenerative memory patent as well).

In 1967, a Control Data attorney read about John Atanasoff in a book on computers, and lawyers representing all sides in the cases converged on Frederick, Maryland, where Atanasoff had retired after rising to a vice president of the Aerojet General Corporation. (He had left the Navy in 1952 and established an electronics company with several colleagues. They sold the firm to Aerojet in 1956.) One of the lawyers briefed Atanasoff about the lawsuits and gave him copies of the disputed patents. Atanasoff, who had seen ENIAC and UNIVAC but had not studied Eckert and Mauchly’s machines very closely, examined the documents. It seemed to him that many of Eckert and Mauchly’s claims derived from his work. Angered, he agreed to help Honeywell and Control Data overturn Sperry’s patents, joining their defense staffs as a paid consultant.

(A patent consists of three parts: illustrations of the device being patented; a written description of the device and its operation; and a list of claims covering only those ideas that originated with the device. In order to be valid, a patent must, among other things, be filed within a year of the creation of the invention. In addition, it cannot be preceded by a published report describing the invention in detail.)

The Honeywell-Sperry case, the first to go to trial, opened on 1 June 1971 and ended 135 days later, on 13 March 1972. Seventy-seven witnesses testified and 32,654 exhibits, including Babbage’s autobiography, were filed. All told, the trial transcript filled 20,667 pages. Obviously, it’s impossible to give a detailed account of the trial here, but at least two points are worth mentioning. A working model of part of Atanasoff’s machine was demonstrated in court, and Sperry’s attorneys glossed over the experiments Mauchly had performed in analog and digital electronics before he met Atanasoff. They did so, it seems, both because they underestimated the seriousness of Atanasoff’s legal threat and because the evidence surrounding Mauchly’s early work seemed too insubstantial to stand up in court.

Judge Earl Larson handed down his decision on 19 October 1973, and Sperry lost on every count. Larson invalidated the ENIAC patent on four grounds, each of which would have been sufficient to strike down Eckert and Mauchly’s claims. First, that the patent had been filed more than a year after the machine had been put to use. Second, that von Neumann’s “First Draft of a Report on the EDVAC” constituted prior publication. Third, that Eckert and Mauchly’s attorneys had engaged in misconduct by deliberately delaying the patenting process, hoping to put off the day the patent took effect and thus increasing its financial value to Sperry Rand. And fourth, and most damaging of all, that Eckert and Mauchly “did not themselves first invent the automatic electronic digital computer, but instead derived that subject matter from one Dr. John Vincent Atanasoff.” Finally, Larson also invalidated the regenerative memory patent on the ground that it too had been derived from Atanasoff.

Larson’s decision appears to be legally correct; Atanasoff’s machine did embody many technical innovations that ended up in ENIAC, and it indeed does appear that Mauchly was directly influenced by Atanasoff’s work. There were, however, some puzzling and contradictory aspects in Larson’s decision; for example, although the judge credited Atanasoff with having invented an “automatic electronic digital computer,” there was nothing automatic about the machine. ENIAC was a much better example of an automatic electronic digital computer, and one wonders exactly what Larson had in mind by the term automatic. Unfortunately, Sperry, which had spent about $1 million on the case, decided not to appeal, and the Honeywell and Control Data cases were dropped.

A lawsuit is one thing, historical judgment another. Atanasoff was a solitary inventor who failed to grasp the importance of his invention and didn’t even bother to publicize it, let alone patent it. After leaving Iowa State in 1942 for a job with the Navy outside of Washington, D.C., he lost all interest in computers. Although he saw ENIAC after the war, he did not make any effort, even for curiosity’s sake, to draw any parallels between the giant machine at the Moore School and his own, now disassembled, device. He championed his invention only after a group of lawyers invited him to join their cause. Despite Larson’s rulings, it was Eckert and Mauchly’s talent and industriousness that led to the development of the stored-program computer and to the birth of the computer industry. Eckert and Mauchly were stripped of their legal claim to primacy in the history of computers, but their historical position is unshakable.

Below, technicians at a Control Data factory in St. Paul, Minnesota, construct a Cyber 205 supercomputer. The machine, which cost $18 million in its most advanced version, executes 800 million operations a second. It contains 100,000 components, fifty miles of wiring, and takes six months to build. Supercomputers like the Cyber 205, which was introduced in 1981, are used for such sophisticated computational chores as airplane design and weather forecasting. A finished Cyber 205 is depicted at the upper left and right; the other pictures show the machine under construction. 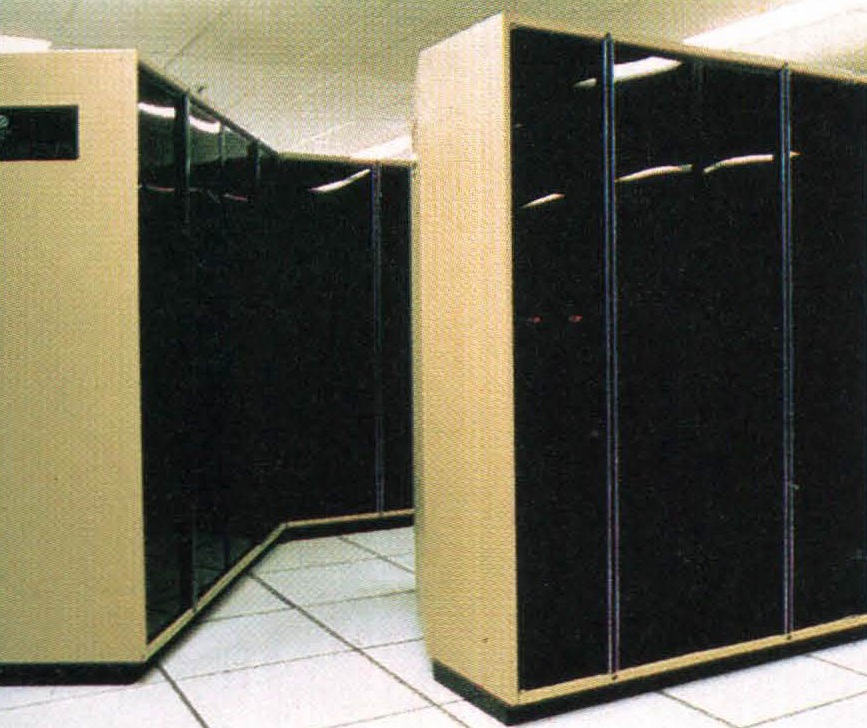 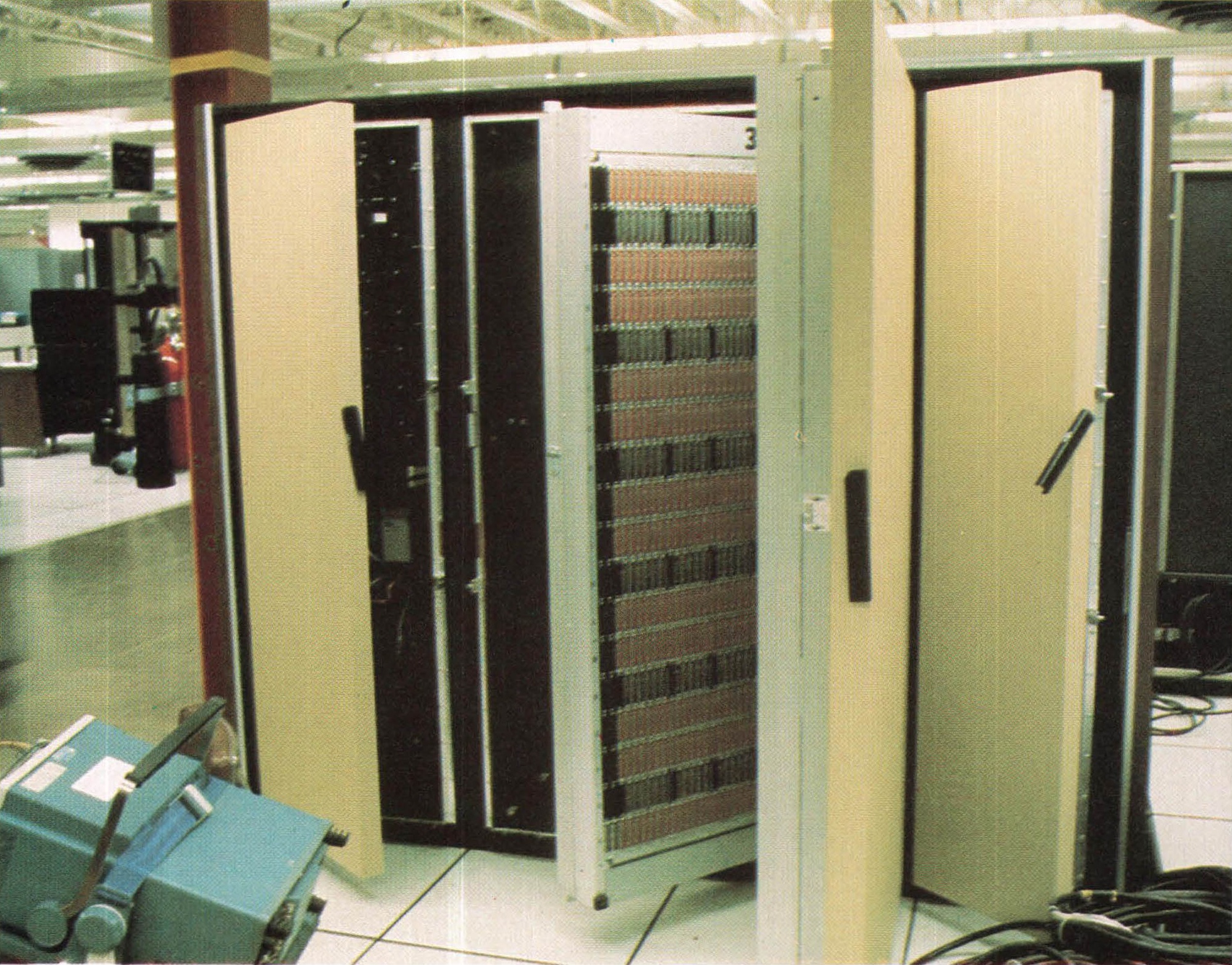 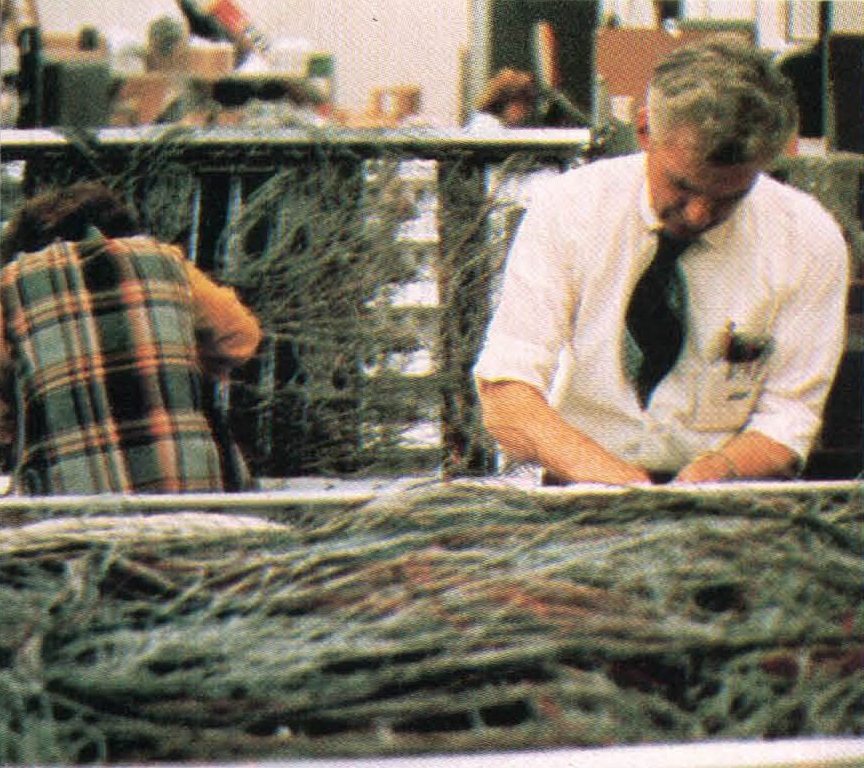 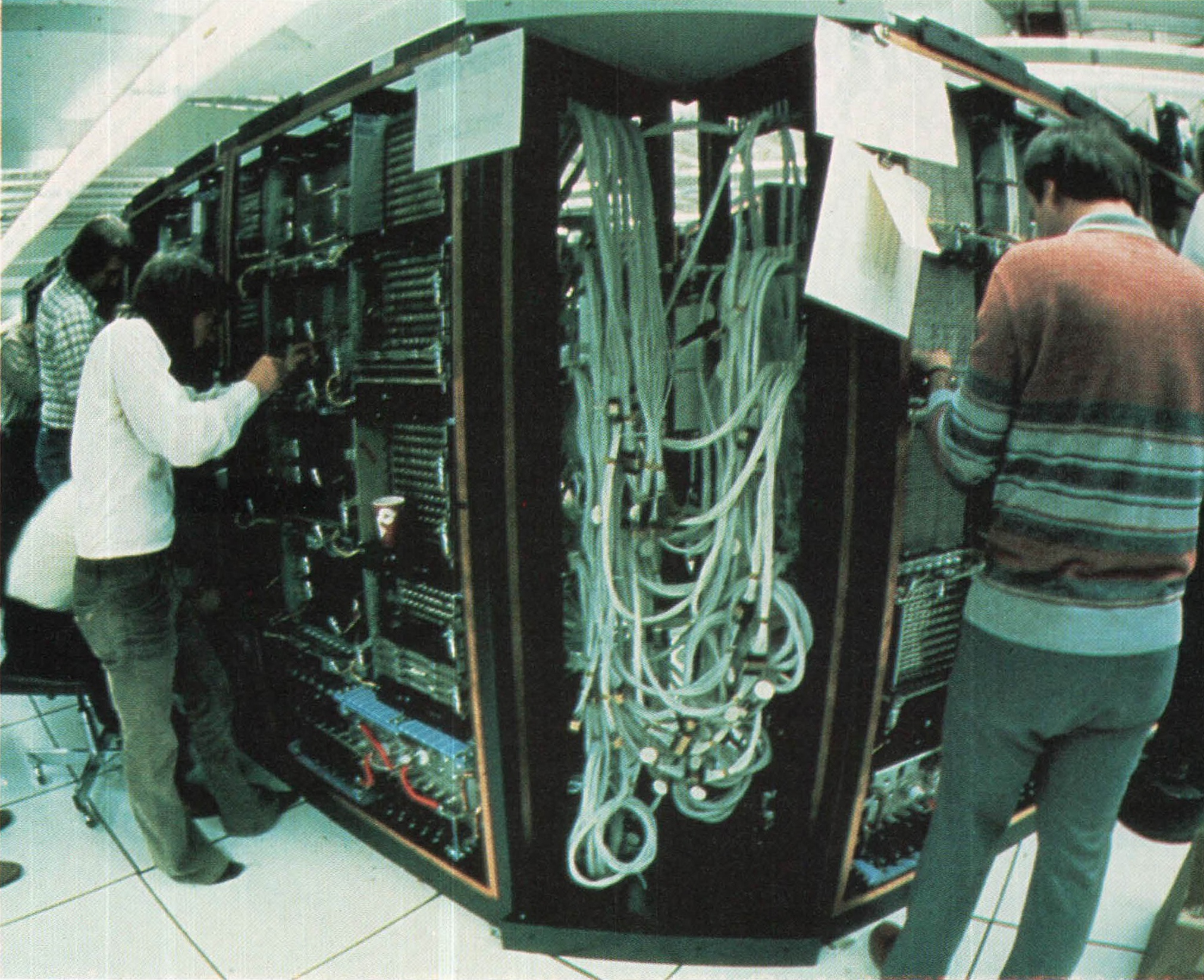 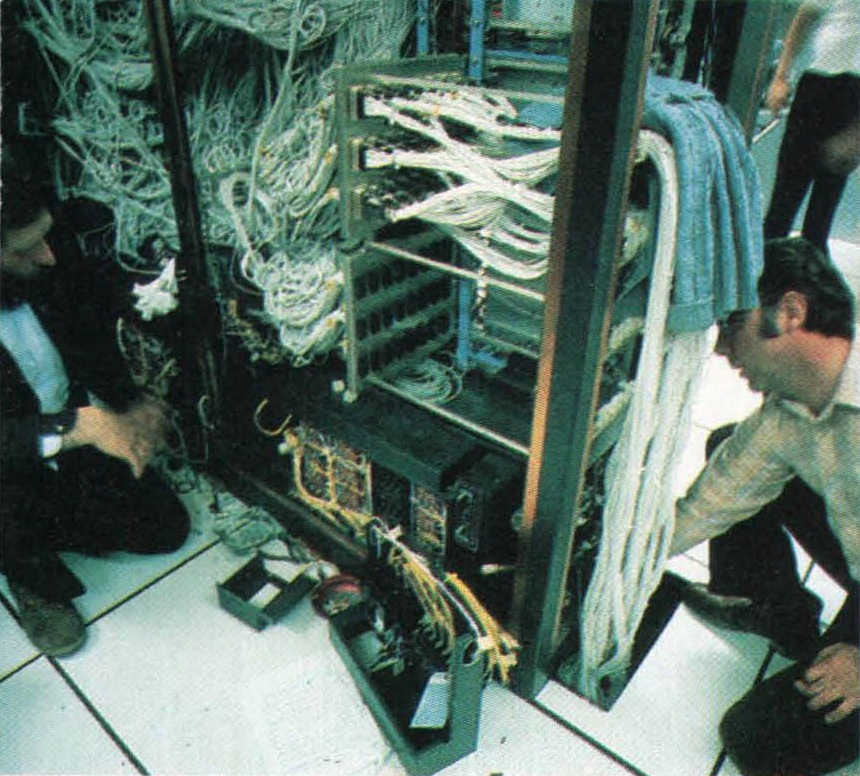 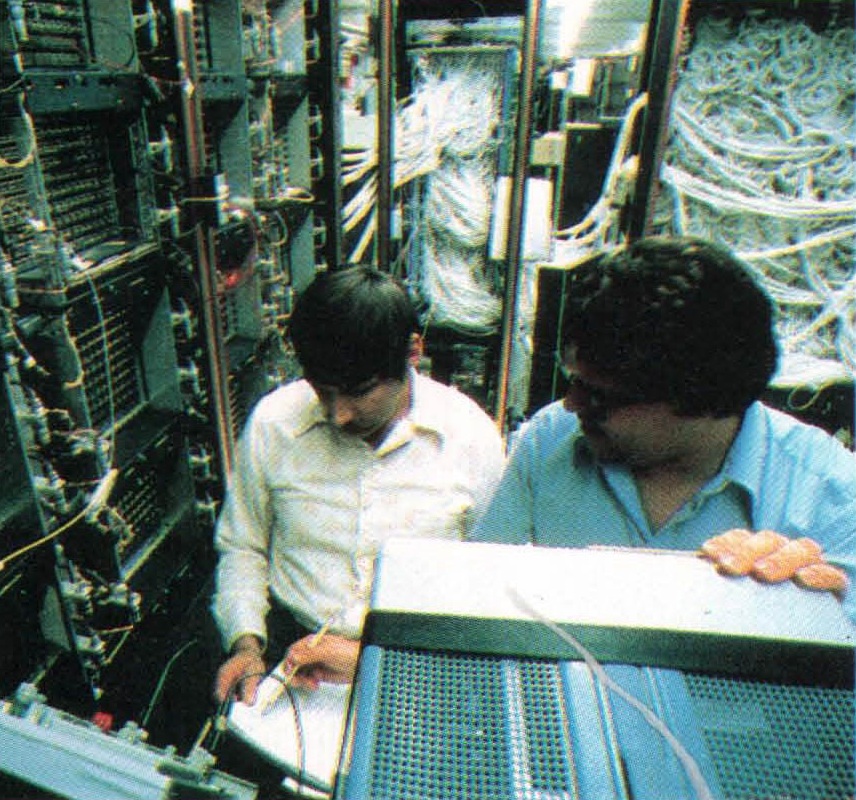